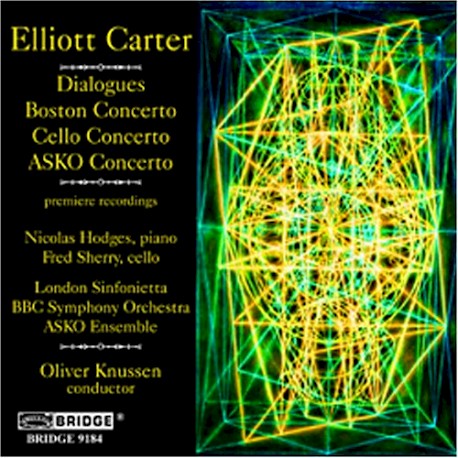 This highly anticipated recording, a Bridge co-production with the BBC, presents first recordings of four major Elliott Carter compositions, all composed within the past six years. Conducted by the distinguished British conductor, Oliver Knussen, these recordings tell the amazing tale of an American composer, well into his nineties, composing at the peak of his powers. Malcolm McDonald writes that “Carter is not far short of his own centenary, and continuing to produce highly complex, sophisticated scores with an energy that would hardly be conceivable even in a much younger man.” The composer traveled to London and Amsterdam to oversee the performance and recording of these four works. Dialogues for piano and chamber orchestra was a BBC Radio 3 commission for the brilliant young British pianist Nicolas Hodges and is scored for piano solo and a chamber orchestra comprising 18 instruments. Carter writes that “Dialogues is a conversation between the soloist and the orchestra: responding to each other, sometimes interrupting one another or arguing.” Hodges, Knussen and the London Sinfonietta give a reading of electrifying intensity. Boston Concerto was commissioned by the Boston Symphony Orchestra, and is based on a William Carlos Williams poem, “Rain”, a verse chosen to convey the composer’s enduring love for his wife Helen, the dedicatee of Boston Concerto. Describing the diaphanous textures of this work, Bayan Northcott writes of Boston Concerto that “despite occasional deep sonorities, the whole work has a kind of distanced lightness, seeming to hover in mid air.” Carter’s Cello Concerto is a twenty minute span introduced by the soloist alone, playing a cantilena that presents ideas later to be expanded into a series of linked movements. The concerto is played by long-time colleague and valued Carter interpreter Fred Sherry who, during the composition of the work, consulted with Carter about the finer details of the cello writing. Scored for a large orchestra that frequently plays with intimately drawn orchestral textures, the Cello Concerto was commissioned by the Chicago Symphony Orchestra and was first performed by the CSO with Yo Yo Ma, cello soloist and Daniel Barenboim, conductor. Carter completed the concise 12 minute Asko Concerto in January 2000 to a commission from the Asko Ensemble of Amsterdam and the recording on this disc is of its first performance in the Concertgebouw on April 26 of that year. The composer writes: “Although the music is in light-hearted mood, each soloistic section approaches ensemble playing in a different spirit.”